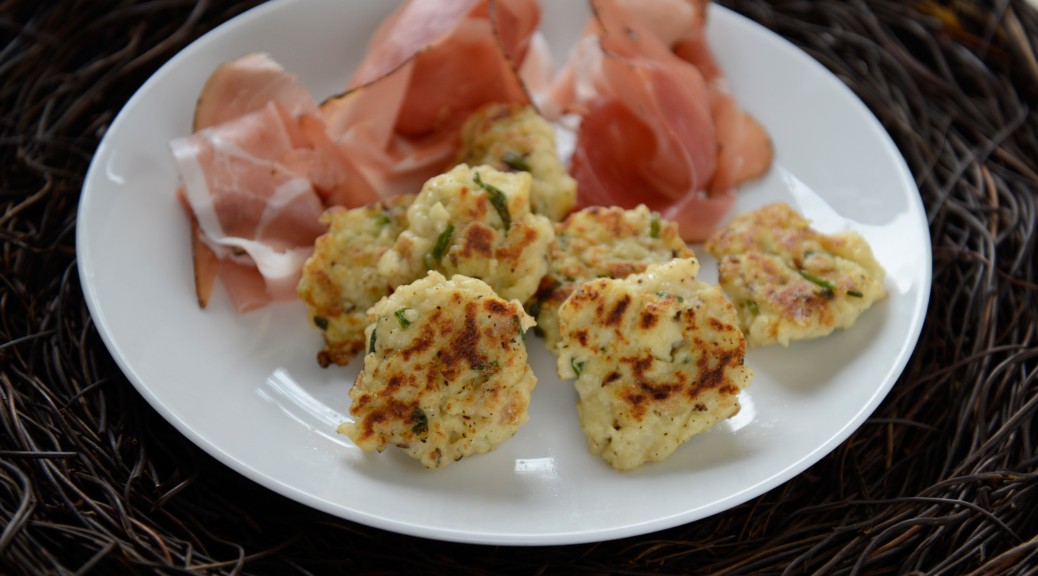 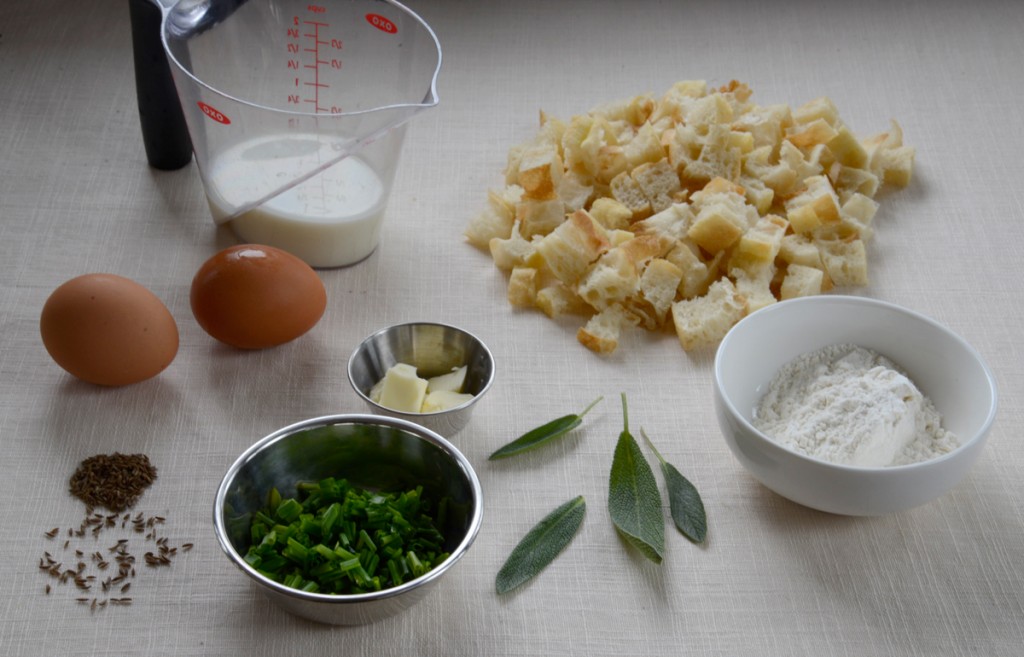 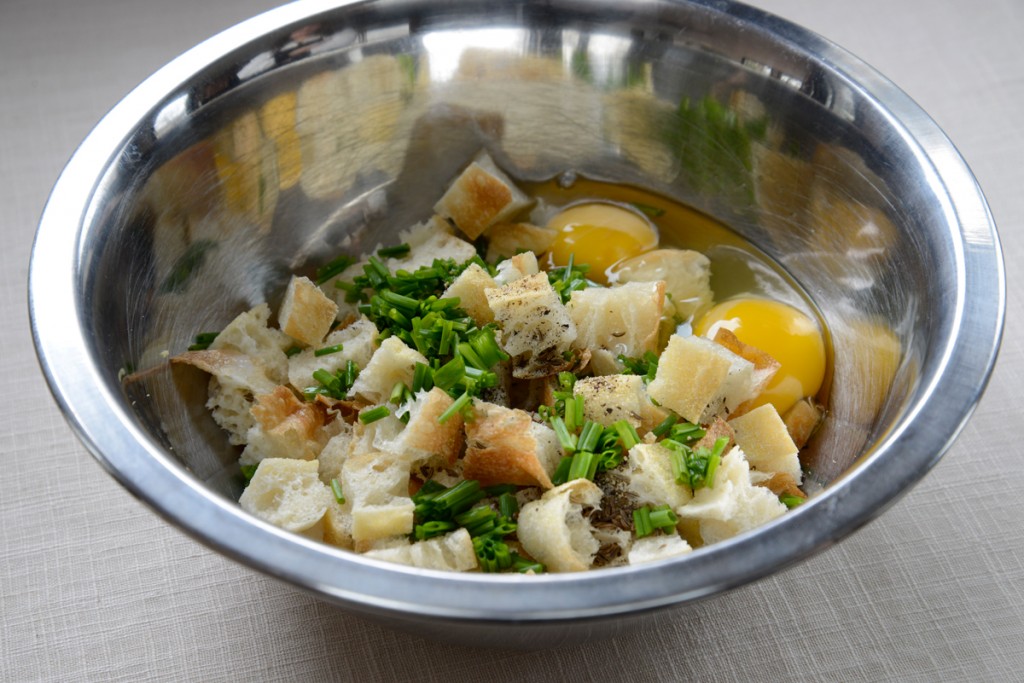 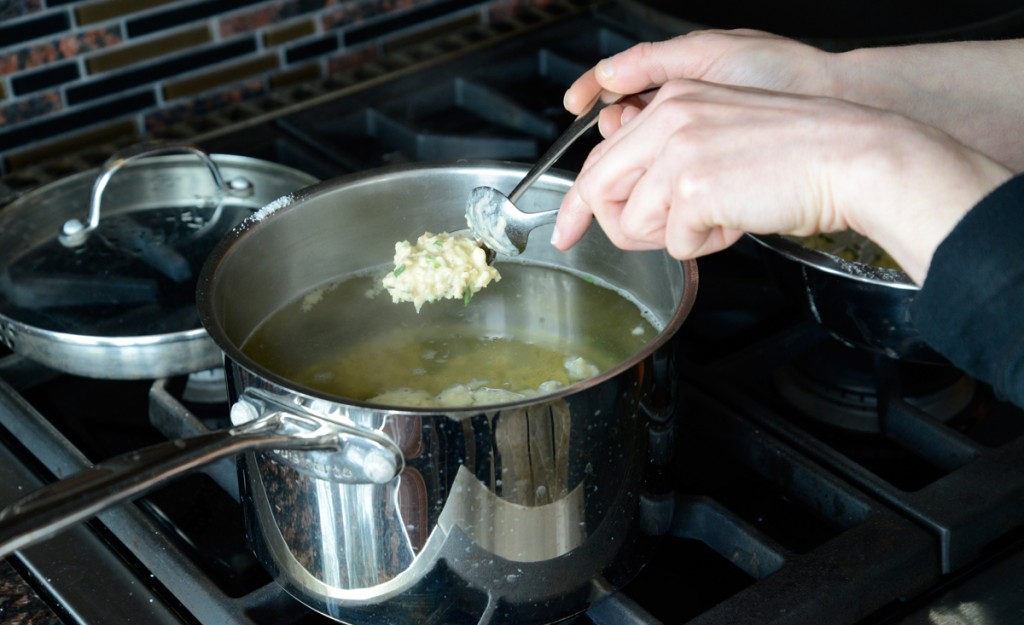 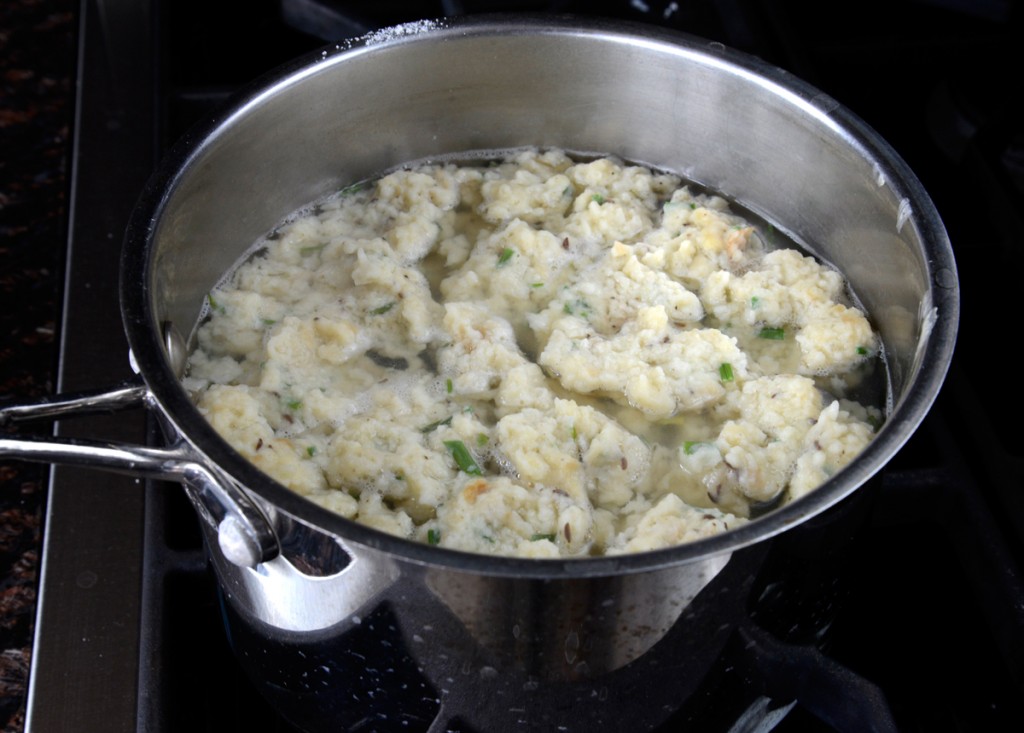 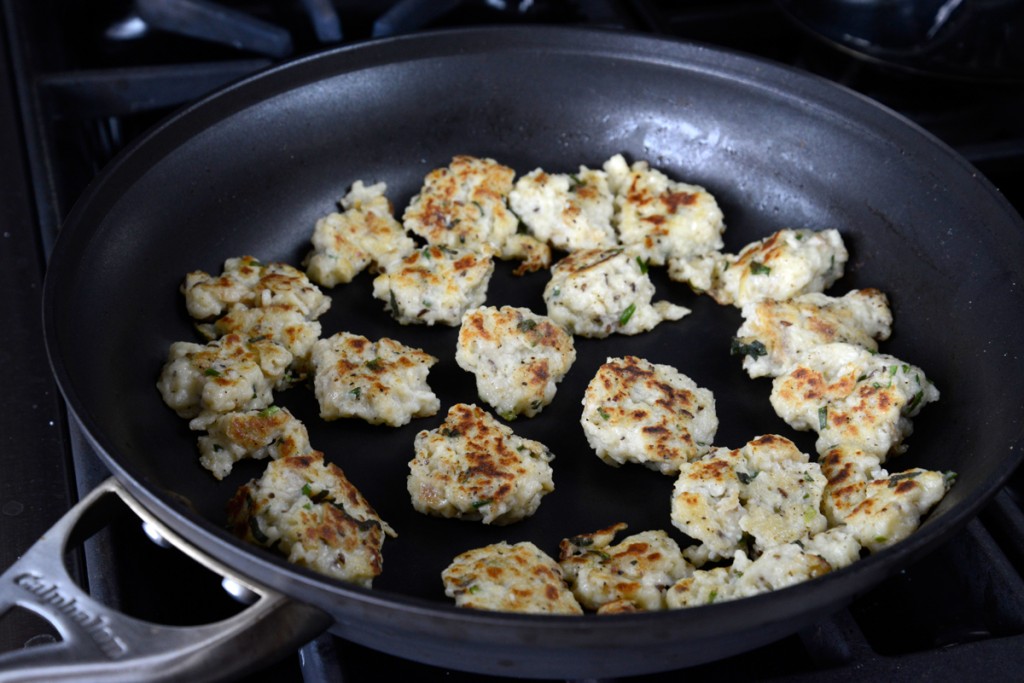 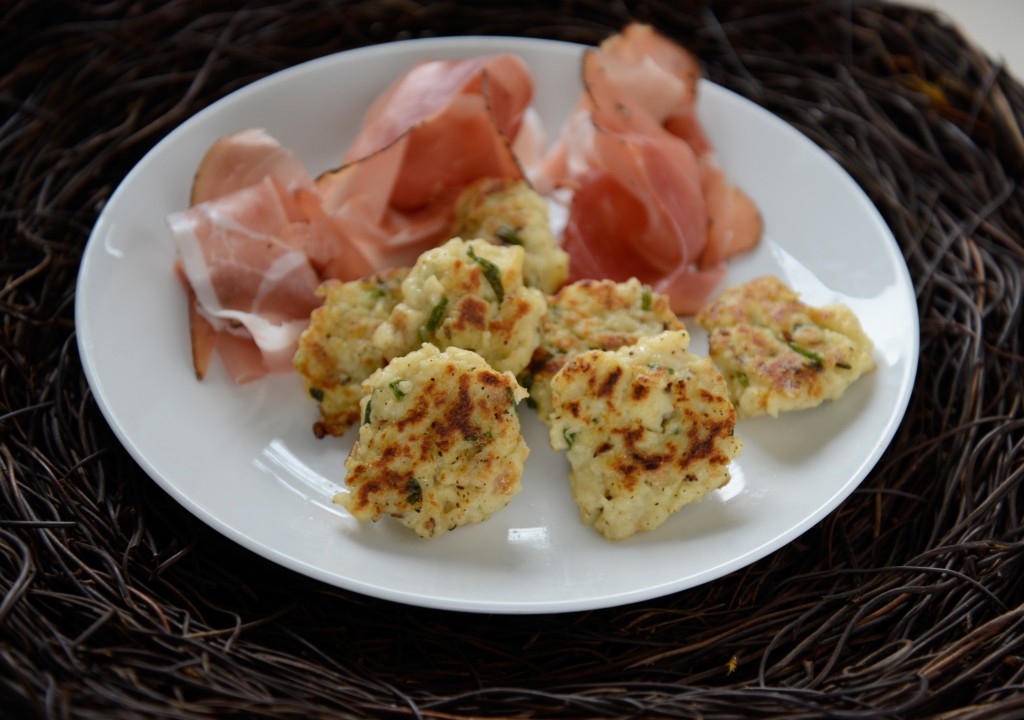 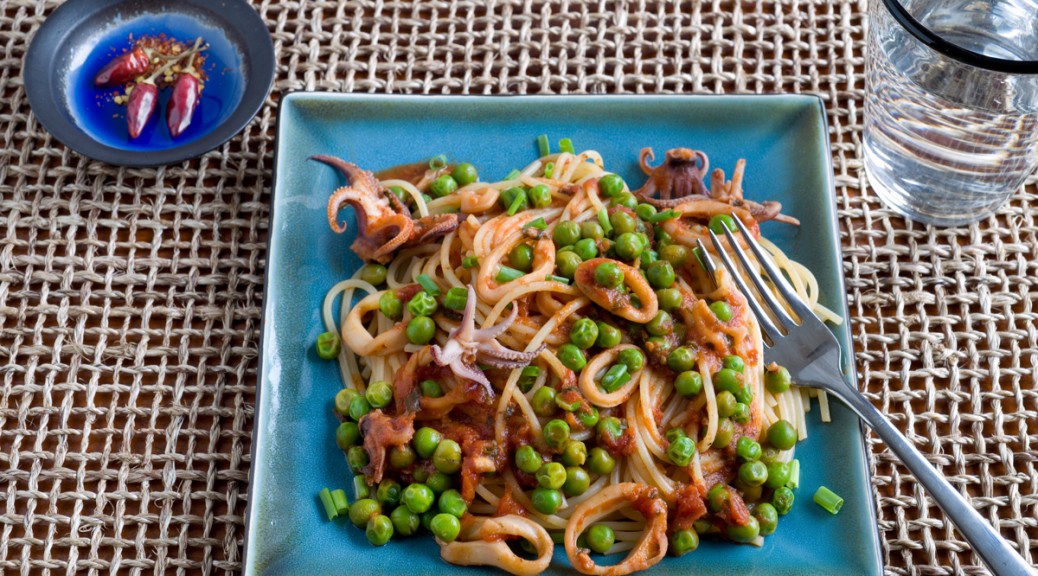 Along the Adriatic Sea, Friulian cooks combine fresh offerings from the water with unusual fresh herbs and spices; parsley is commonplace across Italy as a partner to fish and seafood, but in Friuli, fresh chives are favorites as well. The result is particularly beguiling when peas are added. When it comes to squid, you can either flash-cook it (1 minute or less) or stew it low and slow. Either will result in tender squid, but anything in between is likely

to yield rubbery squid. Here the chosen method is low and slow.  Don’t be

alarmed at the large quantity of squid called for in the recipe below: once they hit the pan, the squid lose so much moisture that they shrink considerably.

Ingredient notes: In Grado and other towns along the coast, cooks use cuttlefish for this recipe as often as squid; feel free to use cuttlefish if you find some at your local fish market. But remember: the smaller the squid (or cuttlefish), the sweeter the taste and the more tender the flesh. 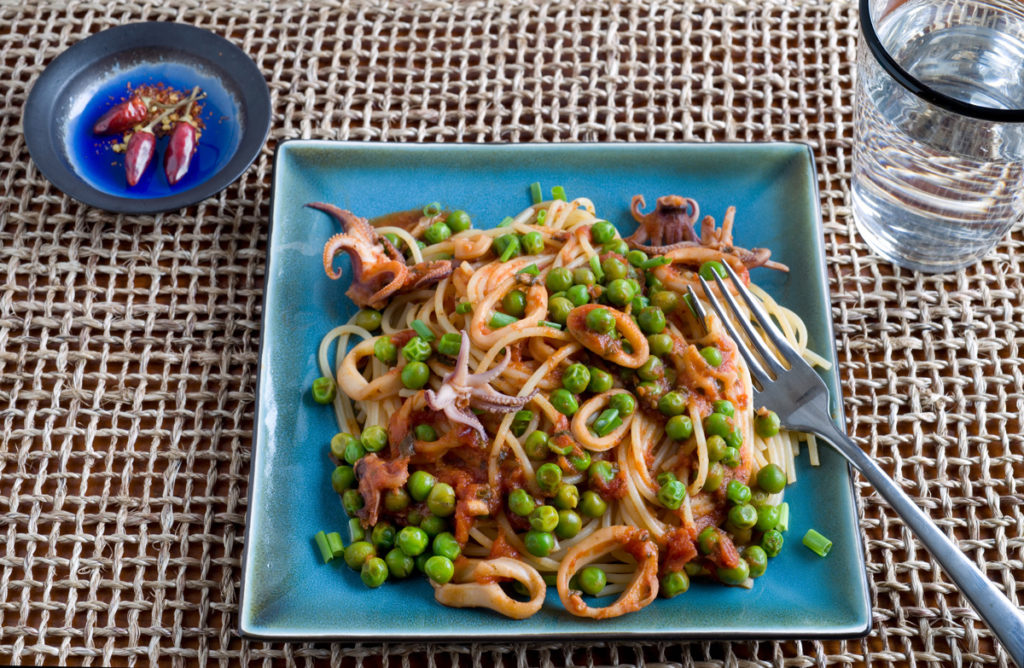 For the pasta and to serve:

Make the sauce: Make a cross-hatch on the bottom of each tomato and cut out the stem end on each tomato. Bring 1 quart of water to a boil and drop in the tomatoes; cook until the skins begin to loosen, about 30 seconds for ripe tomatoes and 2 minutes for firmer tomatoes. Drain and cool. Slip off the skins. Cut in half along the width (the Equator) and scoop out the seeds. Dice finely and set aside.  (I actually like the seeds so I do not remove them, but most classic Italian recipes call for seeding the tomatoes; this is your call. Seeds contain a lot of flavor as well as vitamins.)

Warm the olive oil with the garlic and parsley over a medium flame in a deep, wide saucepan large enough to accommodate the pasta later. When the garlic is just fragrant, but before it takes on any color, add the squid. Cook 10 minutes, stirring often. Add the wine and cook until the wine nearly evaporates, about 2 minutes, then stir in the tomatoes, season with the salt and pepper, and cover. Cook over medium-low heat for 20 minutes, adding water as needed to maintain about ½ cup of liquid in the pan at all times. Stir in the peas and, if needed, some water to keep the sauce nice and moist. Cover again and cook 5 minutes. Adjust the seasoning and keep warm.

Make the pasta: Bring 5 quarts of water to a boil. Add the salt and the pasta. Cook until al dente, then drain, reserving 2 cups of the pasta cooking water.

Transfer the drained pasta to the saucepan and sauté 1 minute over high heat to meld the flavors. Add some of the reserved pasta cooking water as needed to thin out the sauce; it should coat the pasta nicely. Stir in the olive oil. Adjust the seasoning and serve hot, sprinkled with the chives.