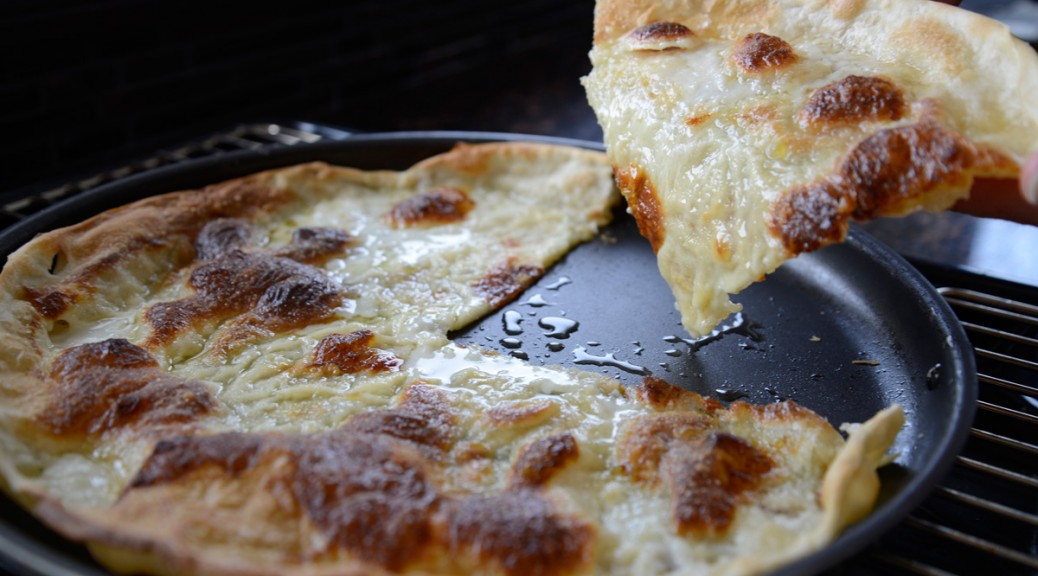 This is quintessential street food in Liguria: thin, flaky dough encasing runny cheese, the whole thing flavored with fragrant olive oil and coarse sea salt. A specialty of Recco, a small seaside town, focaccia di Recco is unlike any focaccia you may have encountered. There is no yeast in the dough, and no salt in the dough either (salt toughens the dough, so it is used only on the top crust, sprinkled on just before baking). The focaccia is baked in huge pans in a blazing hot oven, the top crust emerging burnished and brown, the bottom crust soft and almost lasagna-like thanks to the weight of the cheese.

And the cheese: Stracchino or Crescenza are the only cheeses used, runny, tangy cousins of Gorgonzola, but with no hint of blue and no aging. Almost impossible to find in most American cheese shops, Stracchino and Crescenza can be substituted by Taleggio or even a buffalo milk Mozzarella, and the resulting focaccia will be delicious… but not quite the same as the original. You can mail-order Stracchino from igourmetcom . We met Luigi Guffanti in Piedmont, when we visited with my parents on the Lago Maggiore, and his cheeses are delicious!! 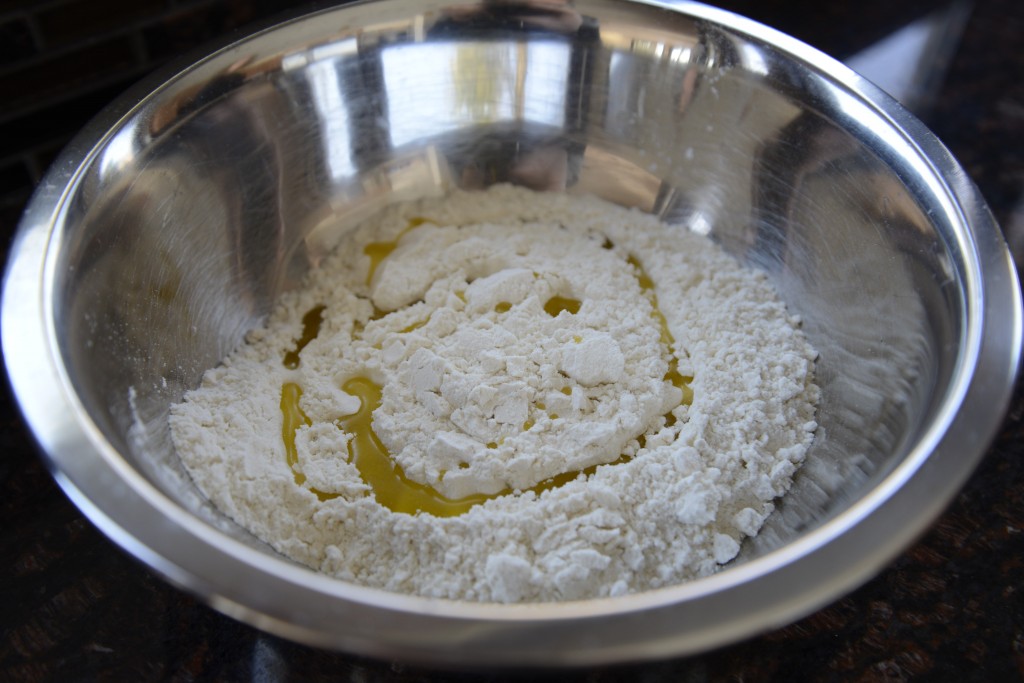 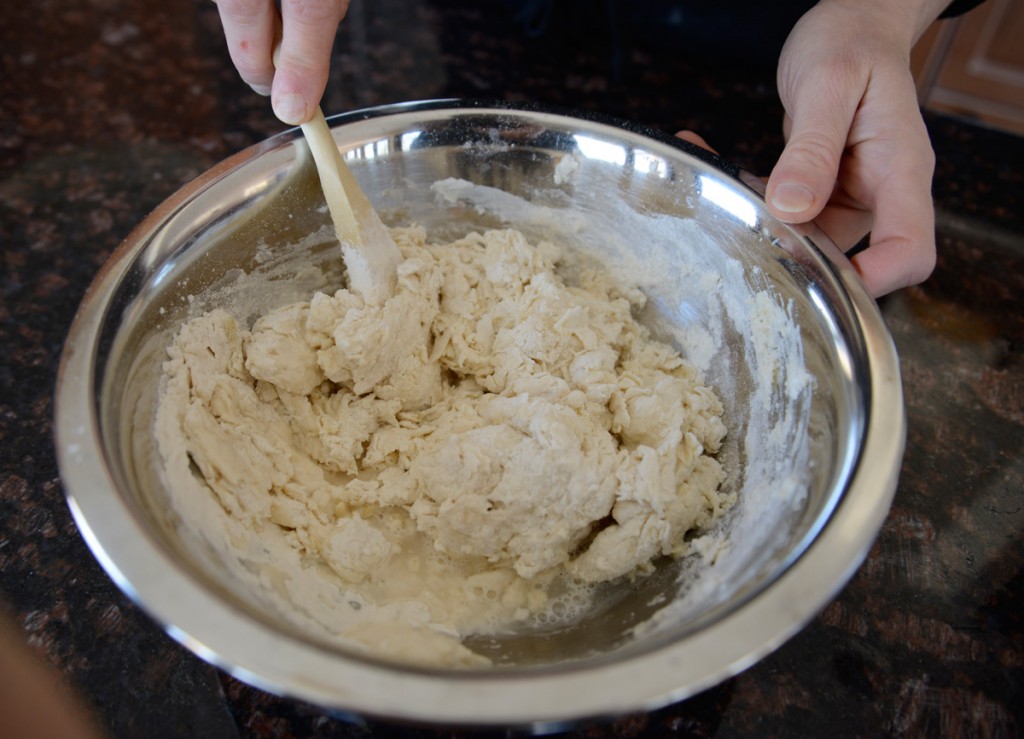 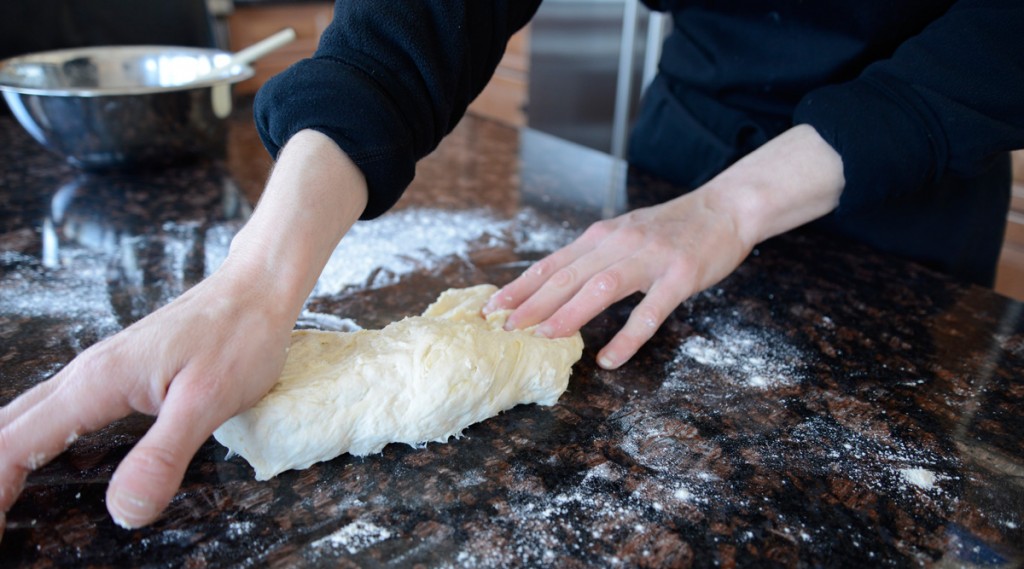 Make the dough: Place the flour the olive oil in a bowl. Add ½ cup plus 2 tablespoons of room-temperature water and stir with a wooden spoon until the dough comes together. Turn out onto the counter and knead for 5 minutes, adding water if the dough is dry or flour if the dough is sticky.

The dough should be soft and supple, or you will not be able to roll it out until it is nearly transparent later; resist the temptation to add too much flour or it may be tough later. Turn the dough out into an oiled bowl, shape into a ball, and wrap. Let rest 30 minutes at room temperature (or refrigerate up to 2 days; return to room temperature before rolling out). 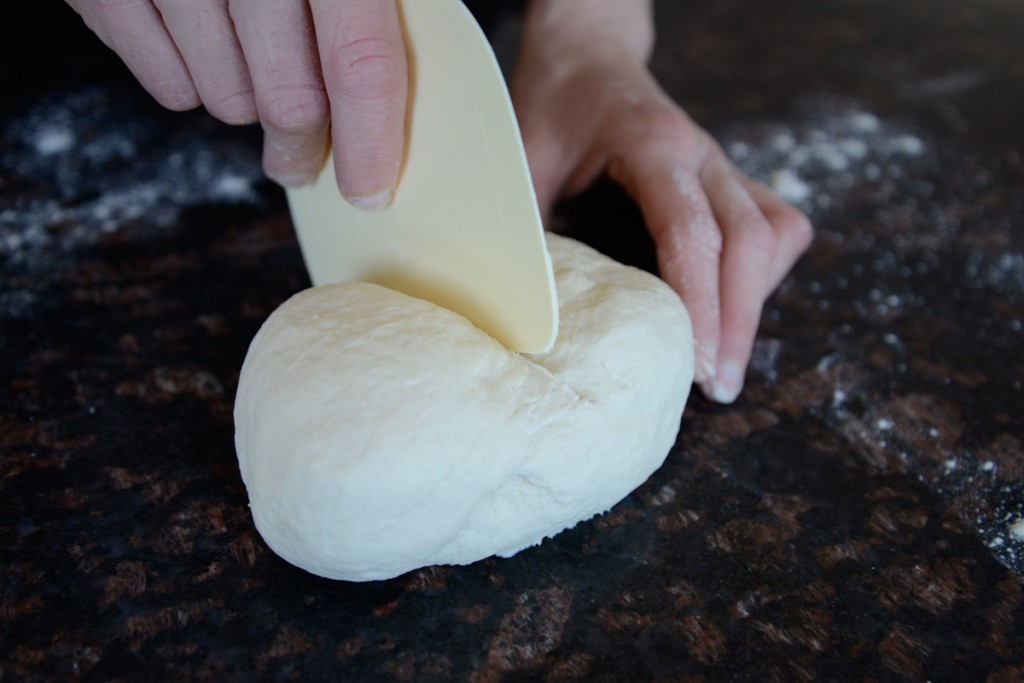 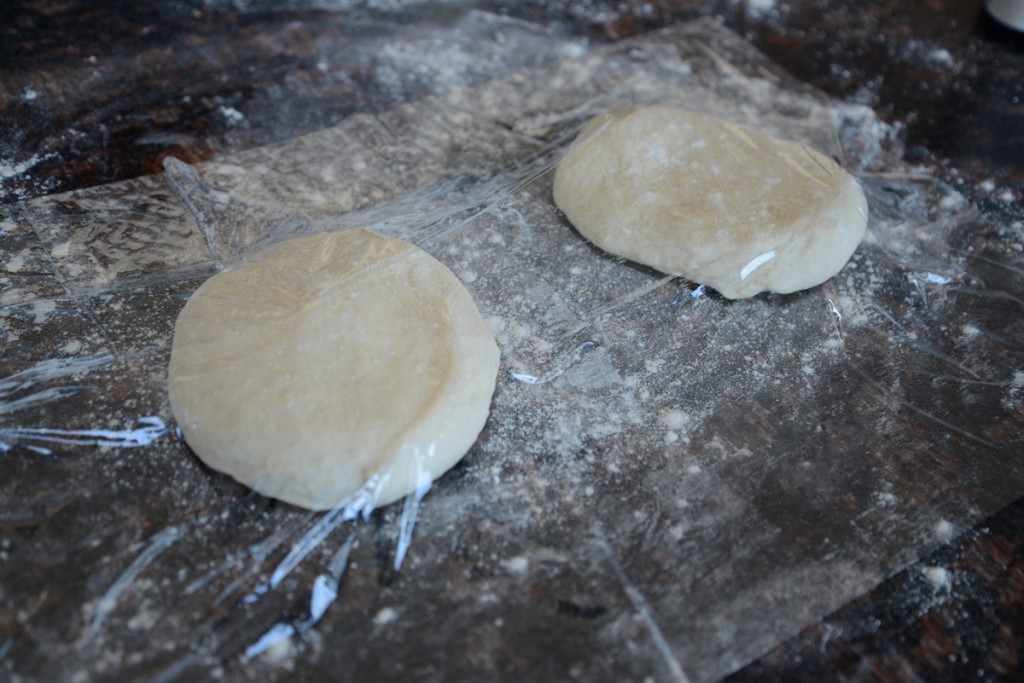 Cut the dough in 2 pieces and shape each into a ball. Cover and set aside 20 minutes to relax. 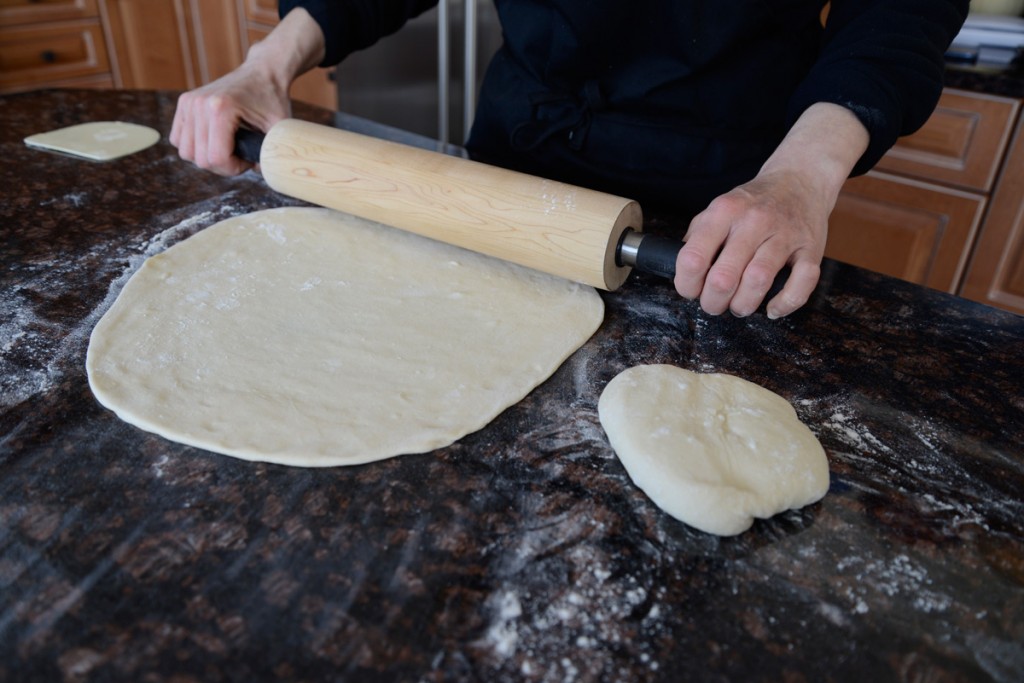 Roll out both pieces on a lightly floured counter until quite thin and allow to rest on a floured counter for 5 minutes to relax and make stretching easier. Make sure there is some flour under the dough or the dough will stick to the counter.

Roll out each piece until nearly transparent (or drape the dough over the backs of your hands and stretch by pulling your hands apart); if the dough tears, patch with your fingers. (This is a very easy dough to work with, and is very versatile.)

Generously oil a round 14-inch pizza pan (use about 1 tablespoon: don’t be skimpy with the oil or the texture of the focaccia won’t be right) and line it with 1 piece of dough, allowing excess dough to hang over the sides (there should be at least 1 inch of excess dough on all sides). 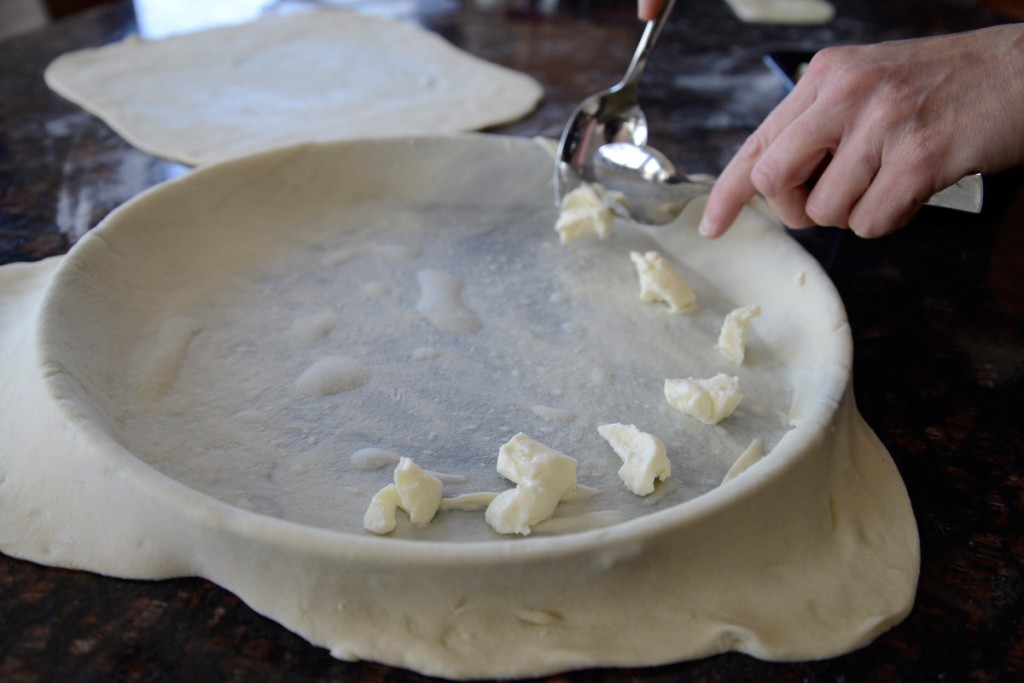 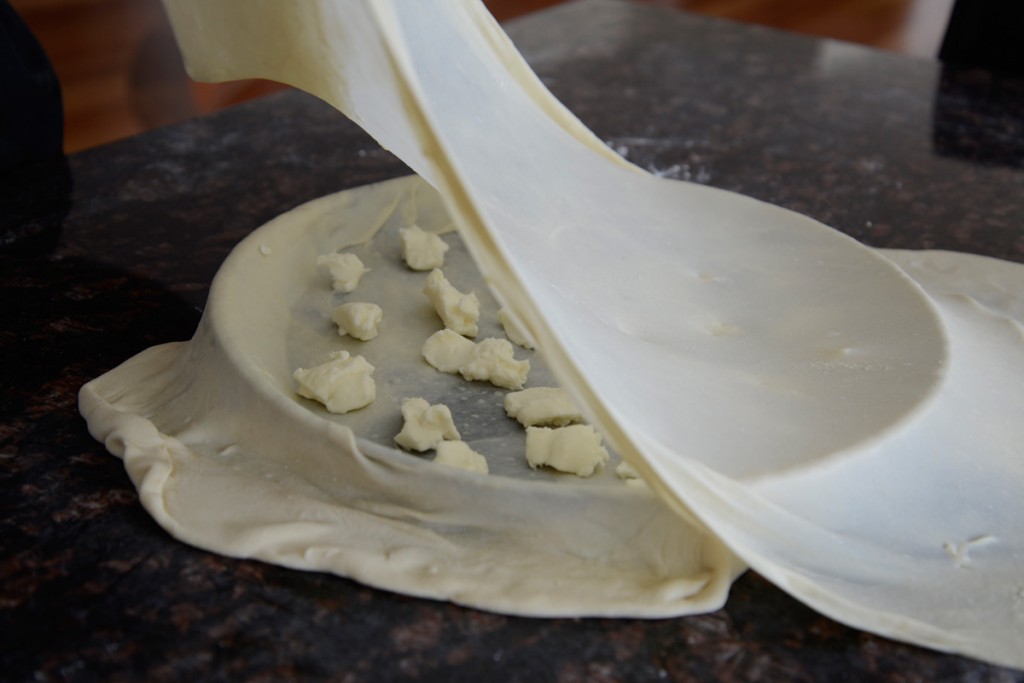 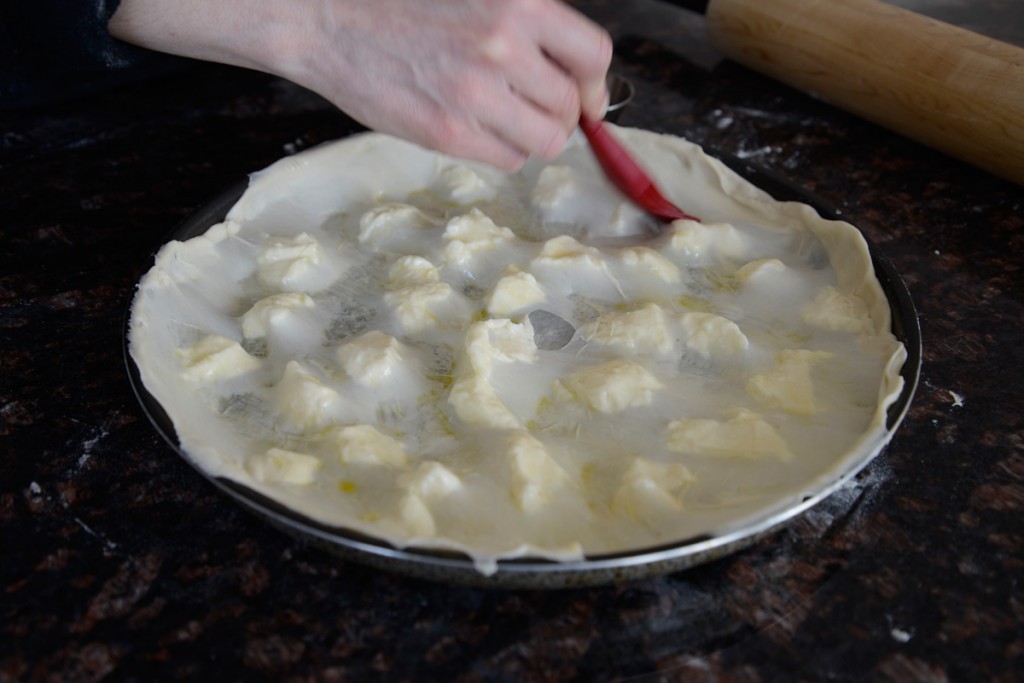 Scatter the Stracchino over the dough, then cover with the other piece of dough. Press the edges to seal and run the rolling pin over the edge of the pan to cut off excess dough, then seal again. (Excess dough can be refrigerated for up to 2 days, covered, and used to make other focaccias; you can also freeze it for up to 1 month and defrost as needed).

To bake: Brush the top of the focaccia with the olive oil and sprinkle it with the salt. Make a few small tears in the top of the dough (this allows air to escape, preventing the dough from doming as a result of accumulated steam as the focaccia bakes) and bake on the baking stone in the preheated 550° oven for 7 minutes, or until the dough is lightly golden and puffed with a few brown spots. You do not want the dough to take on a cracker-like texture. Serve piping hot. 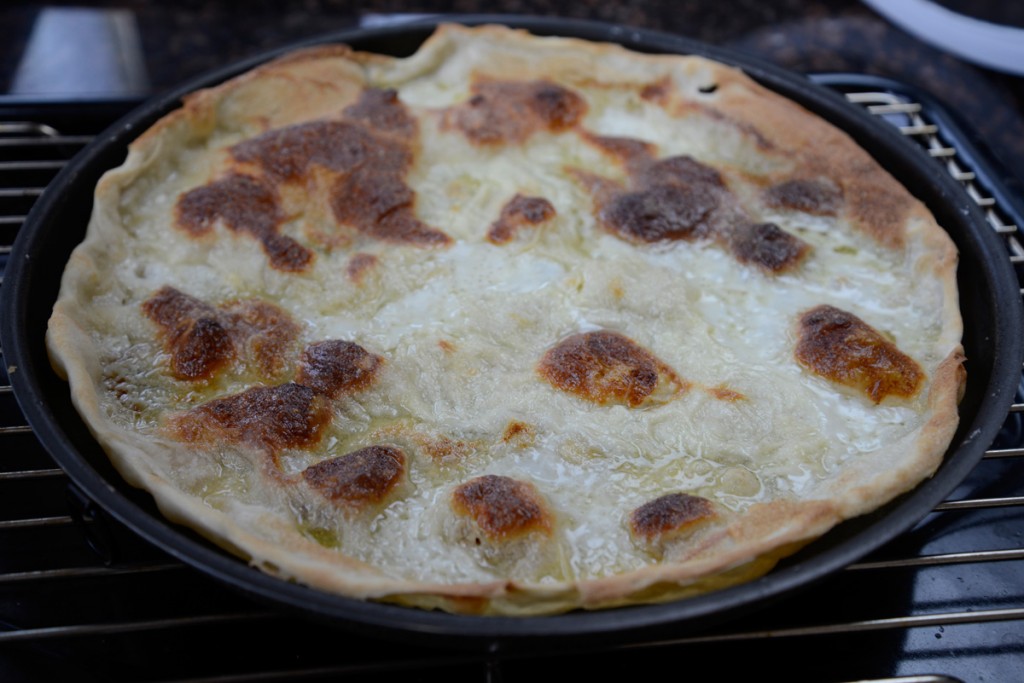 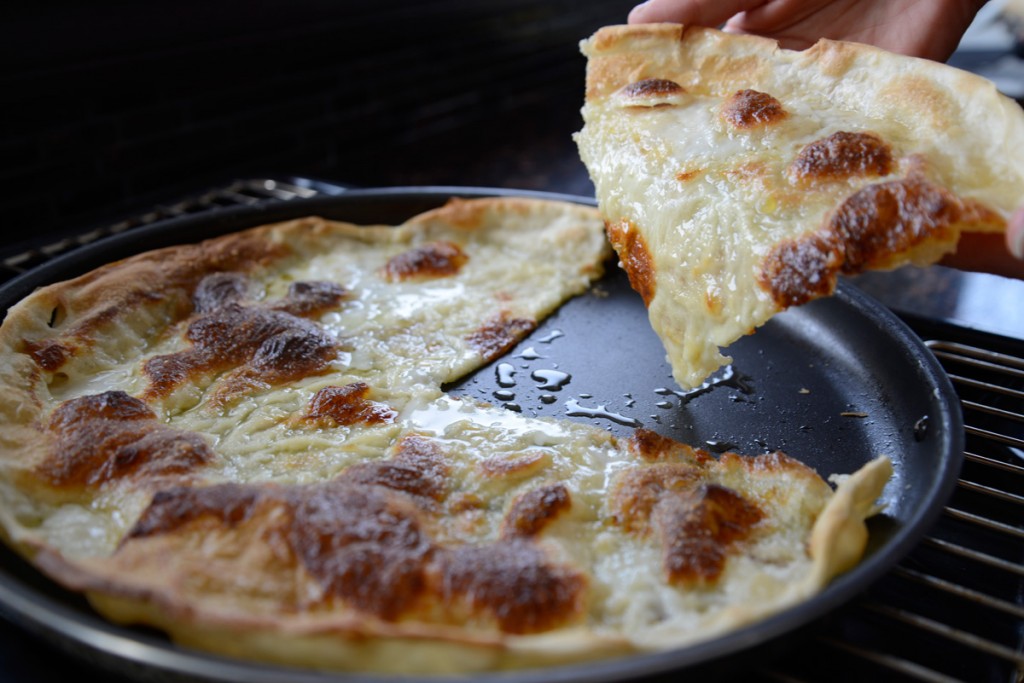