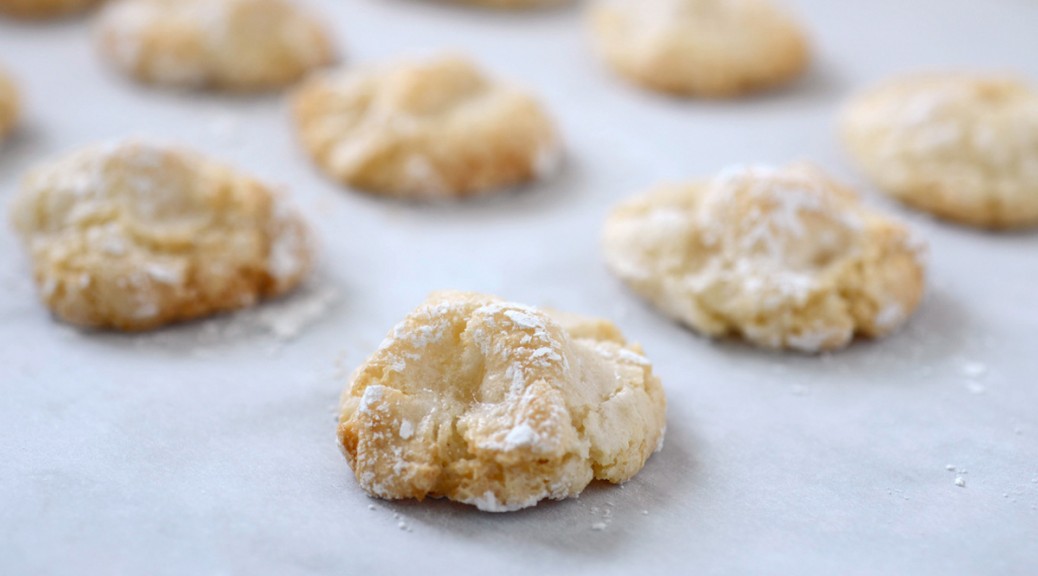 There is no kitchen on earth, I think, that treats almonds better than Sicily’s. Trapani’s pesto calls for almonds and parsley, and cooks on the Aeolian Islands sauce their pasta with a thick tomato and almond sauce; almonds are also ground and added to a veal and chocolate stuffing for savory pies, stirred into chicken stews, and scattered over salads.

As far as sweets go, almond paste is so important in Sicily that it goes by the name of pasta reale (royal paste). Sicilians are skilled at making marzipan pastries shaped like fruit painted in bold colors (a specialty of the nuns of the Martorana convent) and an abundance of almond cookies, macaroons, and cakes. The best time to enjoy all of these sweets is February, when almond trees are in bloom and islanders are busy celebrating spring with almond festivals that hark back to pagan days.

The cookies here are chewy, dense, and sweet, the sort of almond cookies every Sicilian bakery offers. They can be studded with pine nuts or enriched with chopped nuts. For best results, I suggest that you weigh the almonds and sugar rather than measuring by volume, as the amounts will be consistent every time. And when making this dough, remember not to add all of the egg whites; add only as much as needed for the dough to come together. If you add too much egg white, the dough will be too liquid, and the cookies will flatten and spread while baking; while they will still be delicious, they will be crisp rather than chewy. Since the cookies harden as they cool, don’t overbake them; once they are set and blistered (they will still be pale), they are done.

Preheat the oven to 325 degrees (preferably set on convection bake).

Place the almonds in a food processor. Add the sugar and salt, and process to a very fine powder, about 2 minutes.

In a small bowl, combine the honey and almond extract.

Place the ground almond mixture in a bowl. Stir in the honey mixture with a fork. Add just enough egg white to make a mixture that holds together when compressed firmly between your fingers. Do not add too much egg white or the cookies will flatten and lose their shape as they bake (even a teaspoon too much egg white will yield flat cookies, so be careful at this step).

Turn the dough out on a counter and knead for 1 to 2 minutes, forming a cohesive dough. Dust the counter with the confectioner’s sugar.

Working on top of the confectioner’s sugar, roll into a 2-inch-wide log. Cut into 1/2-inch pieces, roll each piece into a ball, and place 2 inches apart on the prepared baking sheet. Pinch the top of each cookie twice between your thumb and index finger, creating four small indentations.

(If making pine nut cookies, at this point you shjuld insert about 6 pine nuts into each cookie, pointy side down. Press gently to imbed the nuts into the cookies.)

Bake the cookies for 7 minutes, or until set and blistery and still white. Do not overbake: these cookies should be moist and chewy, not dry, and should not take on any color. (It is best to err on the side of underbaking; the cookies will dry as they cool.)

Cool on a rack. Store in airtight tins up to 2 weeks. 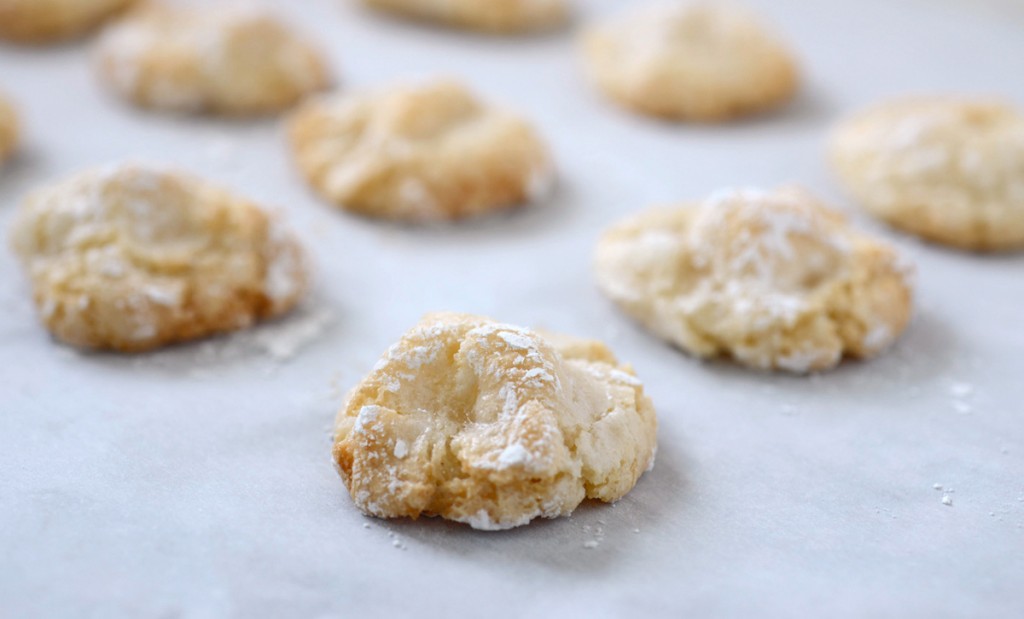 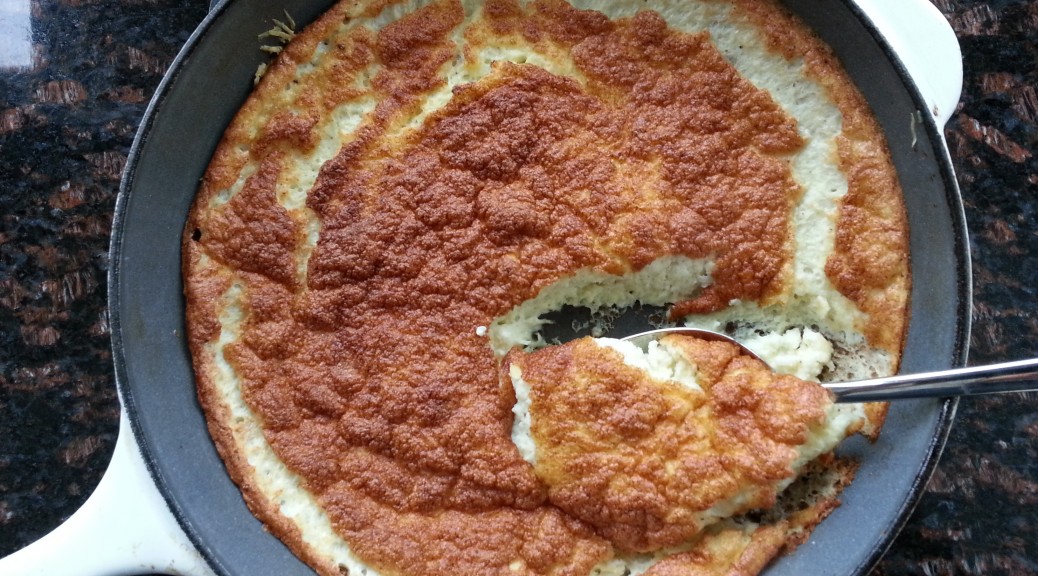 In Italy, there is a class of dishes (some sweet, some savory) that goes by the name sformato, from the word forma, which means mold or shape. Like frittata, a close cousin, a savory sformato is egg-based, but it is heavier on the vegetables, creamy in texture, baked in a mold, then unmolded (hence the name) before serving.

I make sformati with whatever vegetables I have on hand; in the winter, butternut squash, parsnip, fennel, and cauliflower are favorites. If using a starchy or fibrous vegetable (like the four mentioned above), I find it best to boil the vegetable before puréeing it; watery vegetables such as mushrooms or eggplants do better sautéed fist, then puréed. And while I bake sformati in individual ramekins for company, I usually bake a sformato in one large soufflé dish if it’s just the two of us sharing it. Cast iron or enameled cast iron skillets like the one pictured here are a great baking vessel too. In this case, I serve the sformato still in the skillet or soufflé dish, and it’s so comforting to dig in while the sformato is still hot from the oven!

Preheat the oven to 375° (preferably set on convection).

Bring 1 quart of water to a boil. Drop in the parsnip and 1 tablespoon of the salt. Boil 3 minutes, or until the parsnip is fork-tender, then drain and cool under running water. Blot dry thoroughly before proceeding or the sformato will be watery.

Place the parsnip, the remaining 1/4 teaspoon of the salt, the remaining 3 tablespoons of the Parmigiano, the nutmeg, pepper, goat cheese, and whole eggs in the bowl of a food processor. Process until smooth, then transfer to a bowl.

In a clean bowl, beat the egg whites with a whisk until soft peaks hold; the whites should hold their shape when the bowl is turned upside down. If they do not hold their shape, beat a little longer. Fold gently into the parsnip mixture, being careful not to deflate it.

Spoon into the prepared skillet. Immediately bake in the preheated oven for 20 minutes, or until golden, set, and puffed. Serve immediately. 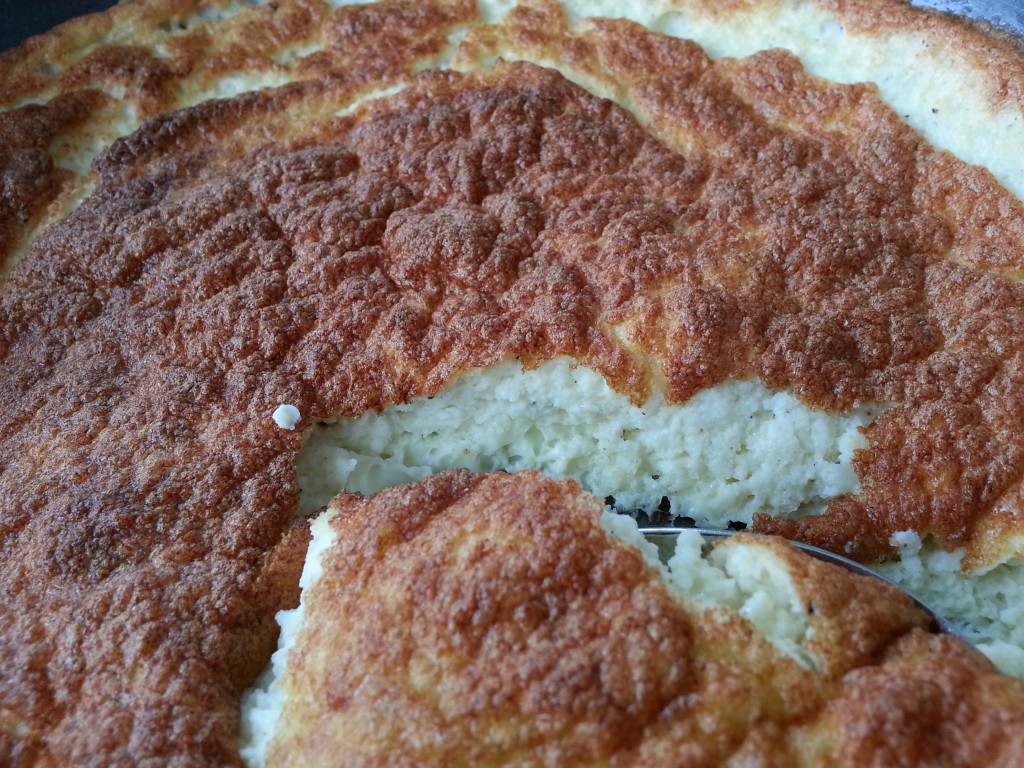 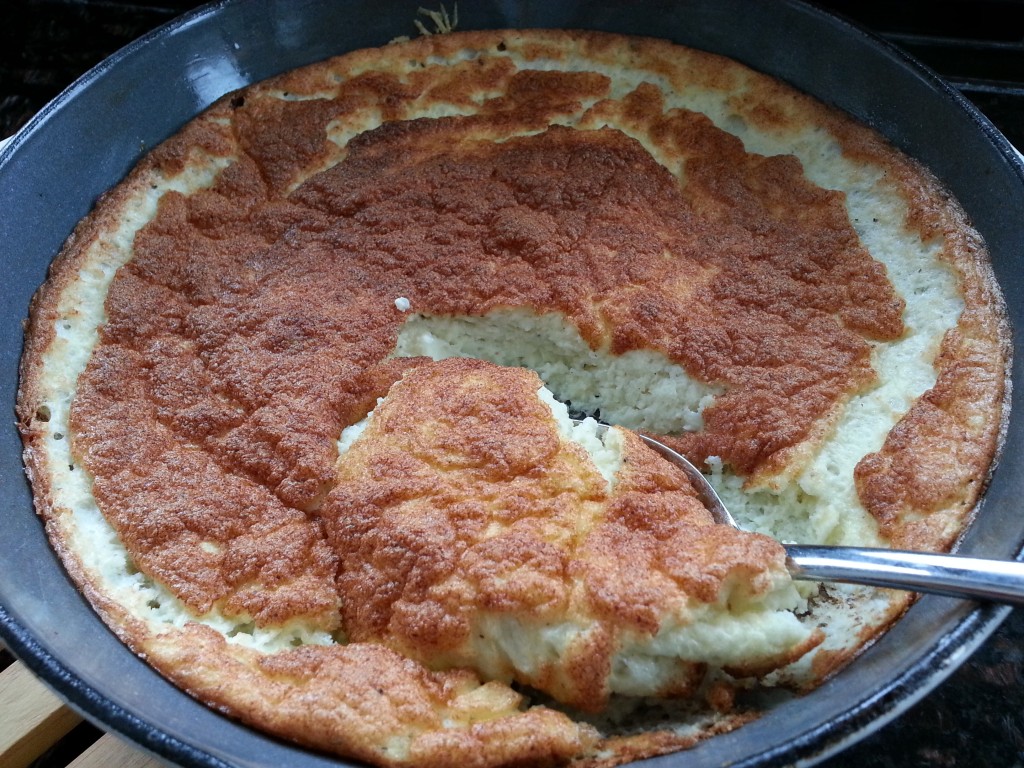 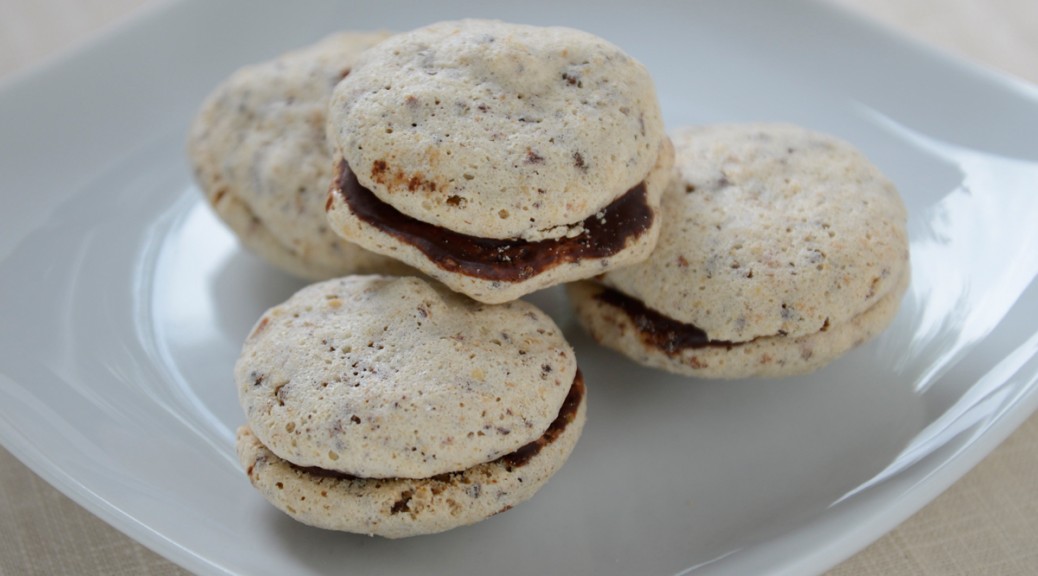 When I was little, my mother made two desserts: creme caramel, which I adored; and meringues, which I did not adore. She made very good meringues, mind you: perfectly crispy and airy, not too sweet, pale, and light. Somehow, though, I never developed a taste for them. And then one day in Matera, I ate a cookie that looked just like a pebble, and discovered it was a chocolate and almond meringue… I was hooked. I worked out the recipe back home, and here it is.

Easy to make, meringues nevertheless require a light touch when the flavorings are stirred in, lest the egg whites deflate. They also need a low, slow bake, allowing the interior to dry fully rather than remain gummy. My mother always leaves her trays of meringue in the turned-off oven after they are baked, and only removes them when the oven is completely cold.

What makes the meringues below special is the almond extract stirred into the batter, which magnifies the almond taste immensely; and the dark chocolate ganache holding the two meringues together, which cuts down on the meringues’ natural sweetness and provides a deep, lingering chocolate finish.

Toast the almonds in the preheated oven until aromatic and a shade darker, about 12 minutes. Cool to room temperature. Chop coarsely in a food processor and set aside; do not pulverize the almonds, or the meringues will be too dry. The almonds should be in fine, small crumbs.

Chop the chocolate in the food processor until it is roughly the size of the almond crumbs, and set aside.

In the bowl of an electric mixer, beat the egg whites with the salt and vinegar until soft peaks form; add the sugar in a thin, steady stream until it is all incorporated and the egg whites are stiff and glossy. Very gently fold in the almond extract, chocolate, and almonds, being careful not to deflate the egg whites.

Spoon the egg white mixture into a piping bag fitted with a wide, smooth tip, and pipe onto the lined baking sheets, leaving at least 2 inches of space in between the mounds. Bake in the preheated oven for 10 minutes.

Lower the temperature to 200°F (preferably set on convection bake) and continue to bake the meringues until crisp and dry, about 25 more minutes. Cool to room temperature on a rack.

Meanwhile, make the ganache: Place the cream in a small pot and warm until boiling. Immediately pour over the chocolate in a bowl and stir until the chocolate is fully melted, stirring as needed. Cool to room temperature.

To serve: Spread the cooled ganache onto the flat side of half of the meringues. Place another meringue half, flat side down, over the ganache. Serve immediately, or store in hermetic containers at room temperature for up to 2 weeks. 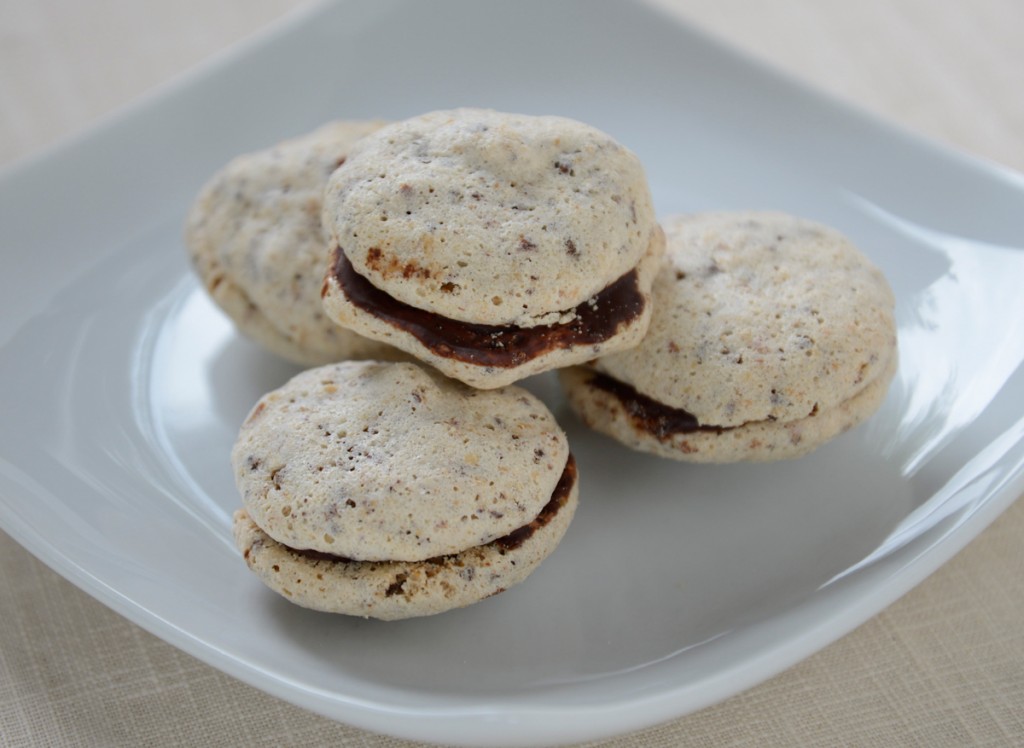