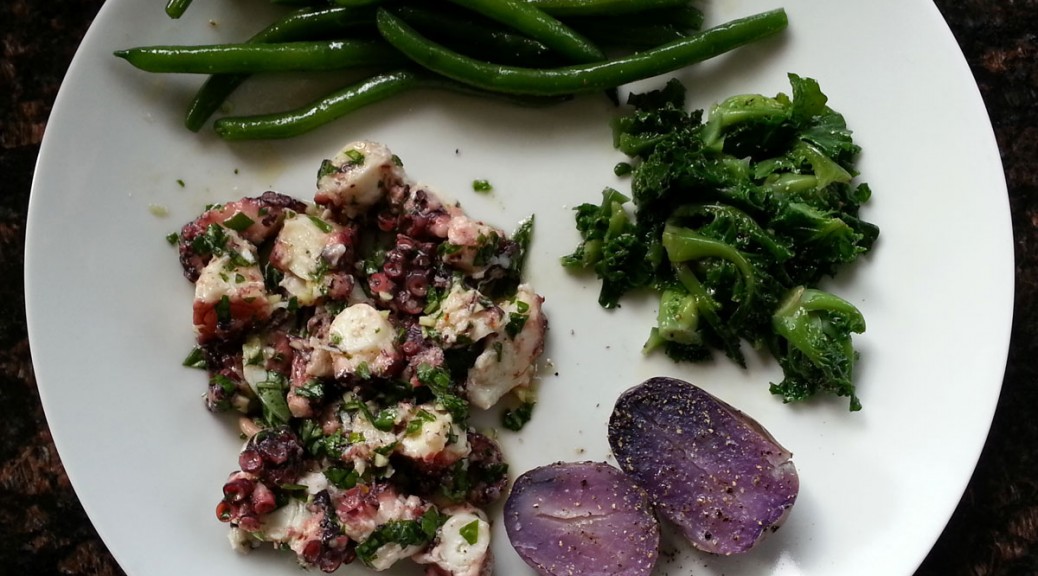 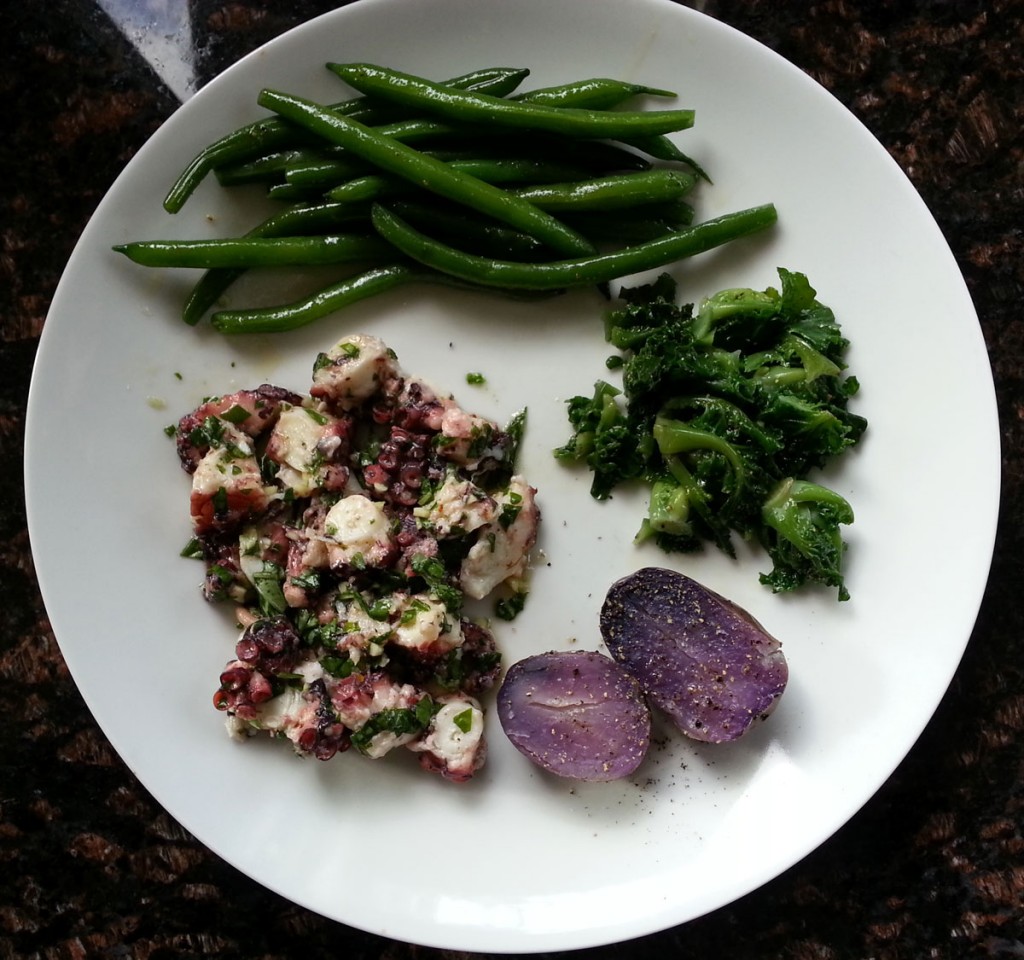 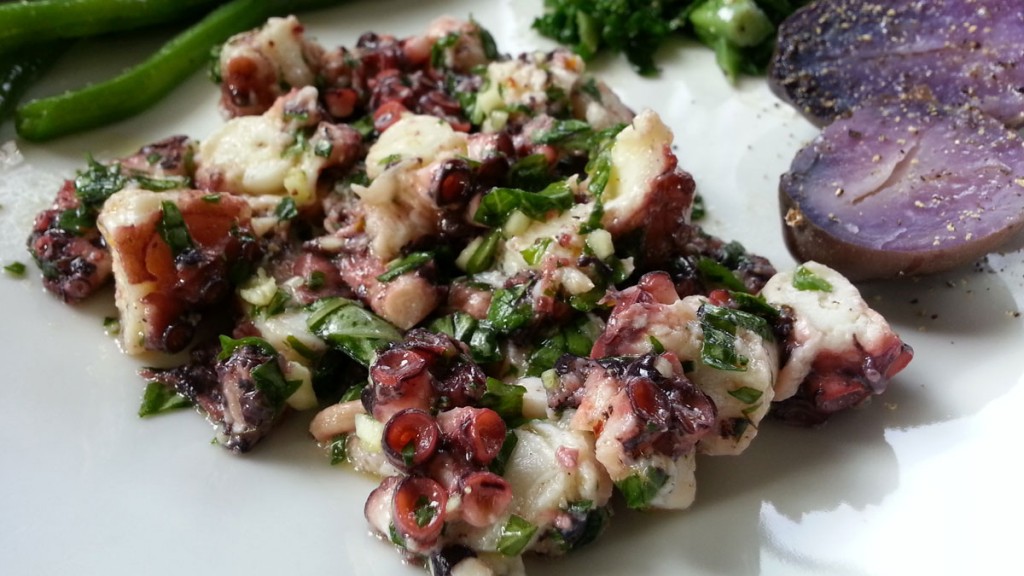 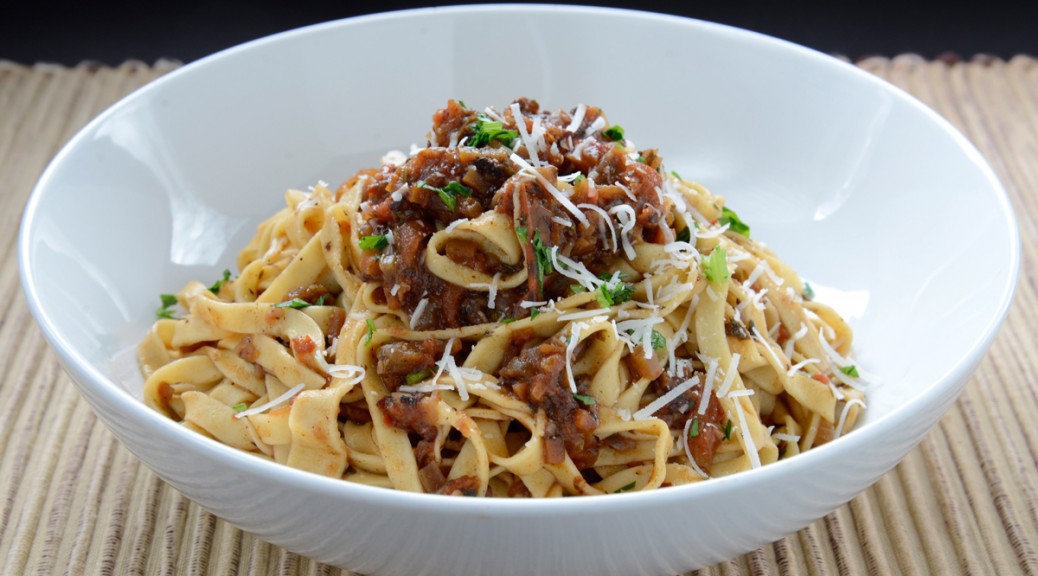 This is Sunday food: beef is pounded thin and rolled around Pancetta, parsley, garlic, and grated Pecorino, then braised with red wine, aromatic vegetables, and tomatoes until succulent. The Pecorino melts inside the bundles, making the sauce even richer and ensuring the bundles hold together. In typical Italian fashion, the stuffed beef bundles (known as braciole in southern Italy, involtini in northern Italy) should be served as a second course, their rich cooking juices tossed with pasta as a first course. 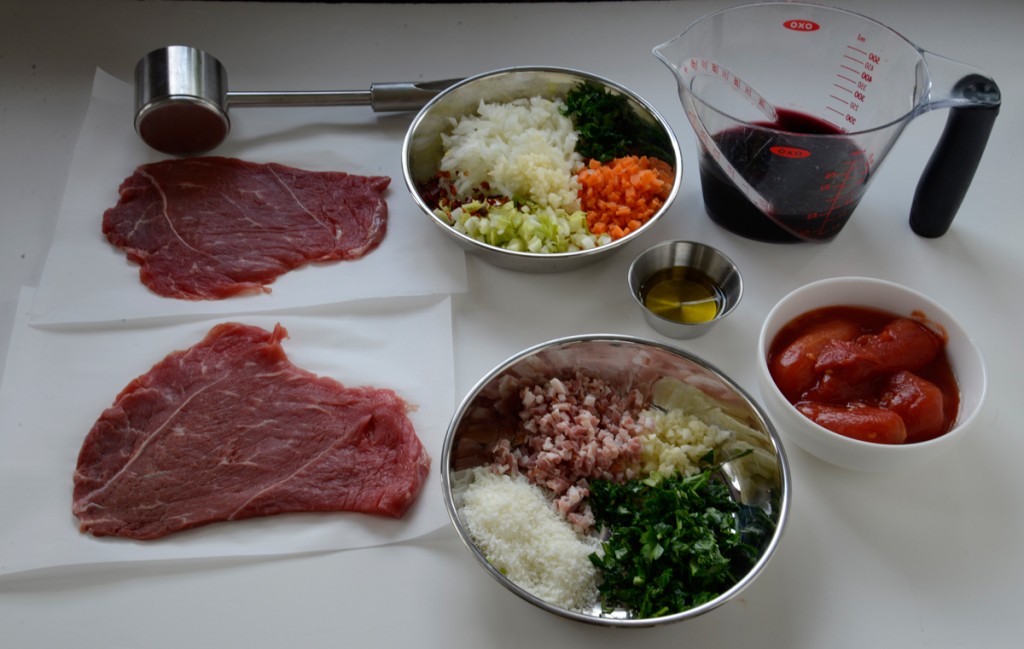 Make the bundles: Line a counter with a sheet of aluminum foil or parchment paper and place the two slices of steak on the foil or parchment in a single layer. Season evenly with the salt and pepper. In a bowl, combine the Pancetta, garlic, parsley, and Pecorino. Following the natural grain of the meat, and roll into tight bundles. The meat will be more tender once cooked if you roll with the grain instead of against the grain, so that when you slice the braciole later, it will be against the grain.

Make the sauce: Warm the olive oil in a deep, wide saucepan large enough to accommodate the pasta later. Add the bundles and cook over medium heat, turning as needed, until the bundles brown evenly on all sides, about 10 minutes. (Don’t worry if a bit of the stuffing pops out while searing; it will add richness to the sauce.)

Stir in the onion, carrot, celery, garlic, parsley, and chili, and cook until the vegetables are translucent and lightly golden, about 5 minutes.

Deglaze with the wine and cook until it almost fully evaporates, about 3 minutes, scraping the bottom of the pan to release any bits and pieces that have stuck. Add the salt and pepper and stir in the tomatoes and water. Bring to a gentle boil. Cover and cook over low heat for 1 to 2 hours, or until the bundles feel tender when poked with a fork, adding a bit of water as needed to prevent scorching and to keep the sauce pleasantly moist and turning the bundles once in a while to promote even cooking. Taste the sauce and adjust the seasoning. Keep warm. 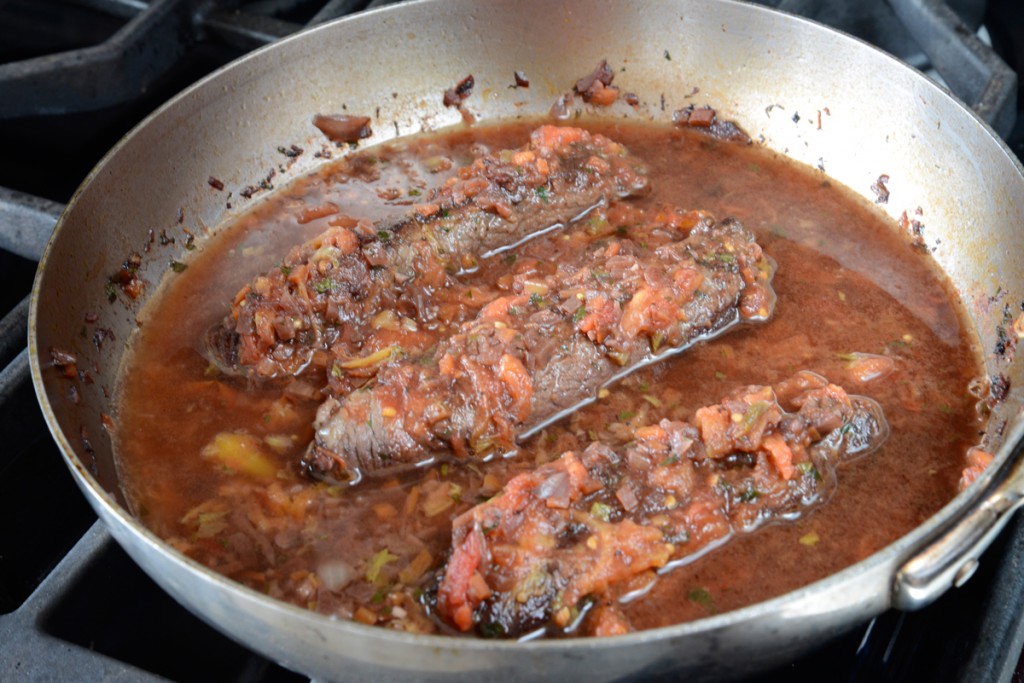 When you are ready to serve, make the pasta: Bring 5 quarts of water to a boil. Add the salt and the tagliatelle, and cook until al dente. Drain, reserving 2 cups of the pasta cooking water.

To serve: Thin out the braciole sauce in the pan with enough of the reserved pasta cooking water to obtain a flowing consistency; taste again and adjust the seasoning if needed. Add the tagliatelle to the sauce, sprinkle with the Pecorino, and toss vigorously to coat. Serve the pasta hot, sprinkled with the parsley. Serve the braciole as a second course. 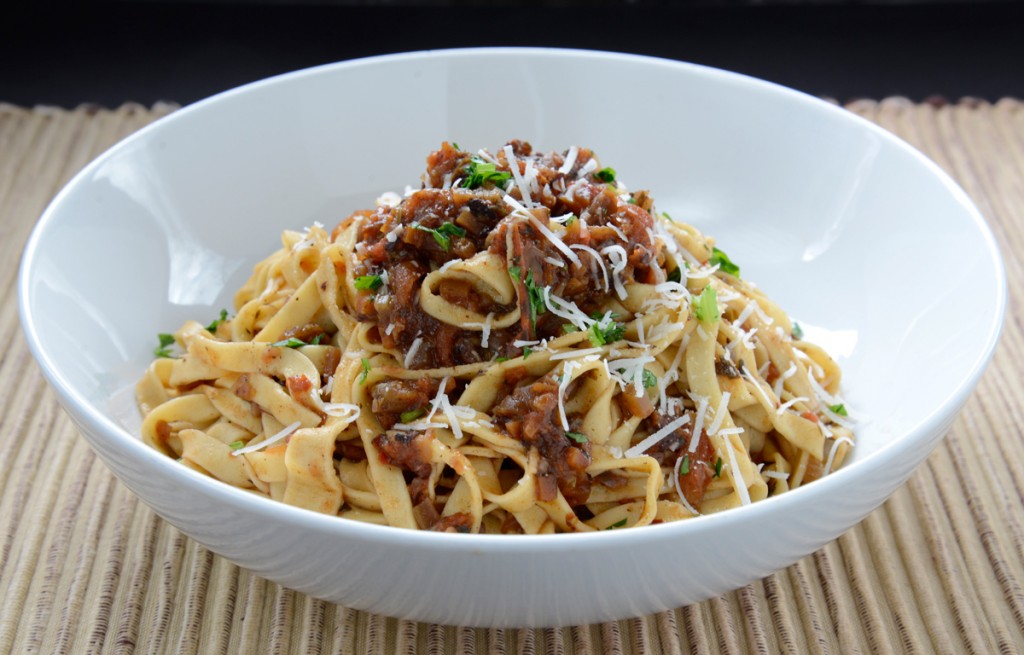 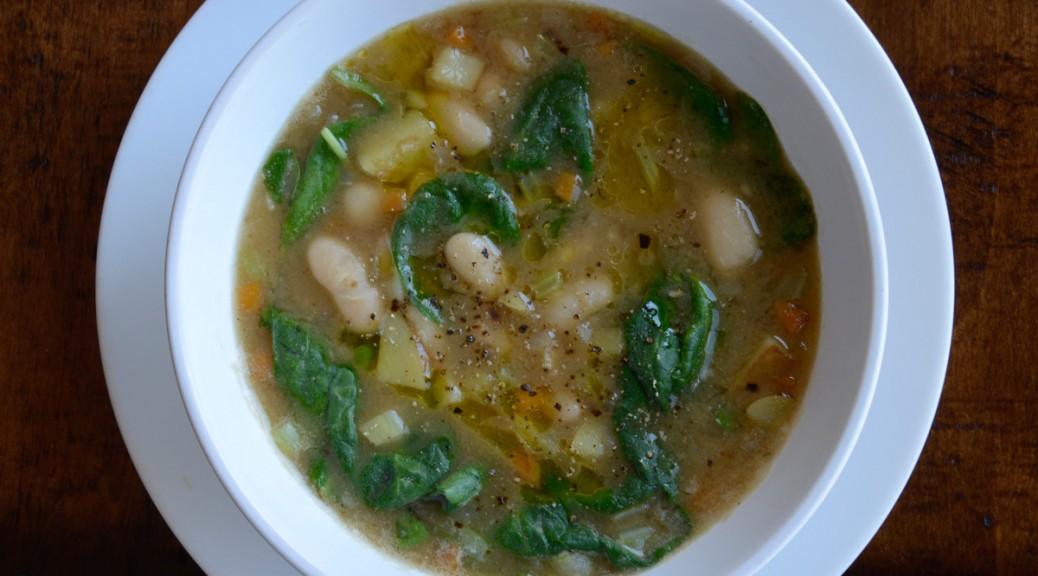 This recipe takes me back to Lucca, a medieval walled city in Tuscany where my husband and I always stop to eat a lunch of thick, hearty soups. I say soups because frankly we skip the main course and order three soups instead: a farro soup; a lentil or bean soup such as this one; and a vegetable soup. Last week, craving the flavors of the soups we have savored in Lucca over the years, I came up with this simple, soothing recipe for lunch. A drizzle of raw olive oil just before serving and a sprinkling of freshly ground black pepper bring all the flavors in perfect balance.

To make this soup the starter to a perfect meal, serve with thick slices of garlic-rubbed grilled bread for dipping. Follow the soup with a simple salad of greens tossed with grated carrots, lemon juice, olive oil, salt, and pepper, and the crazy delicious wild rice fritters above. 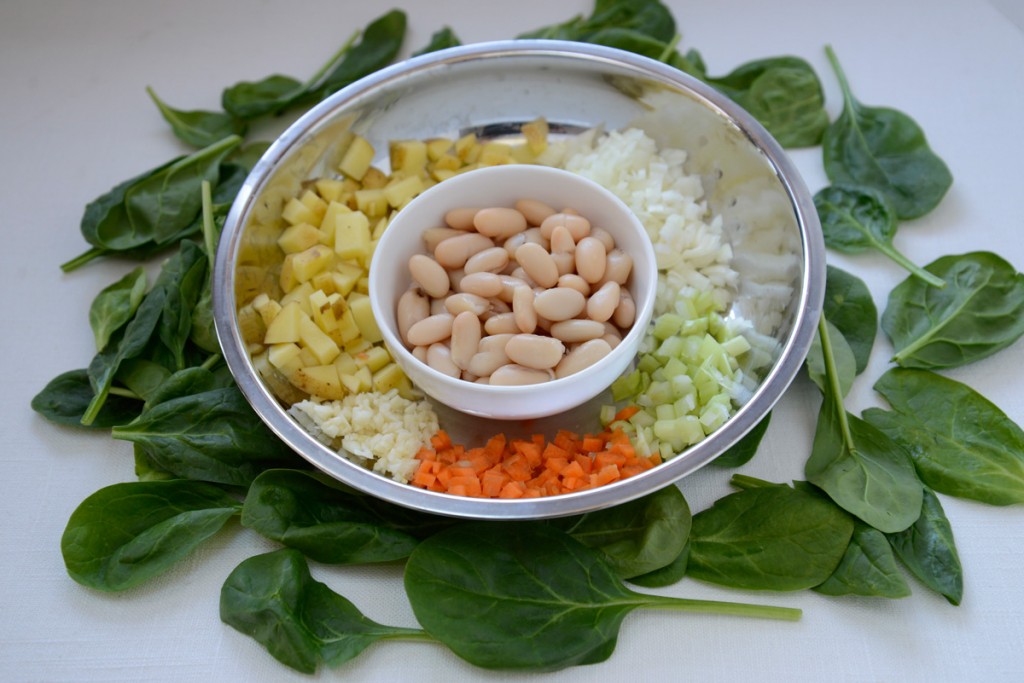 In a heavy-bottomed 2-quart pot, place 1 tablespoon of the olive oil, the onion, carrot, celery, potato, and garlic. Set over medium-low heat and cover with a tight-fitting lid. Cook about 10 minutes, stirring once in a while and adding a tablespoon or so of water as needed to prevent scorching, until the vegetables are starting to soften and the potato has lost its raw look.

Add the drained beans and season with the salt and pepper. Pour in the water or broth and cover again. Bring to a gentle boil and cook until the potato is completely tender and the beans have started to break down a bit, about 15 minutes. Using a fork, crush some of the beans against the side of the pot to thicken the soup.

Stir in the spinach, cover again, and cook 10 more minutes, or until the spinach is very silky. Taste for salt and adjust as needed. Serve hot, drizzled with the remaining tablespoon of olive oil and sprinkled with freshly ground black pepper. 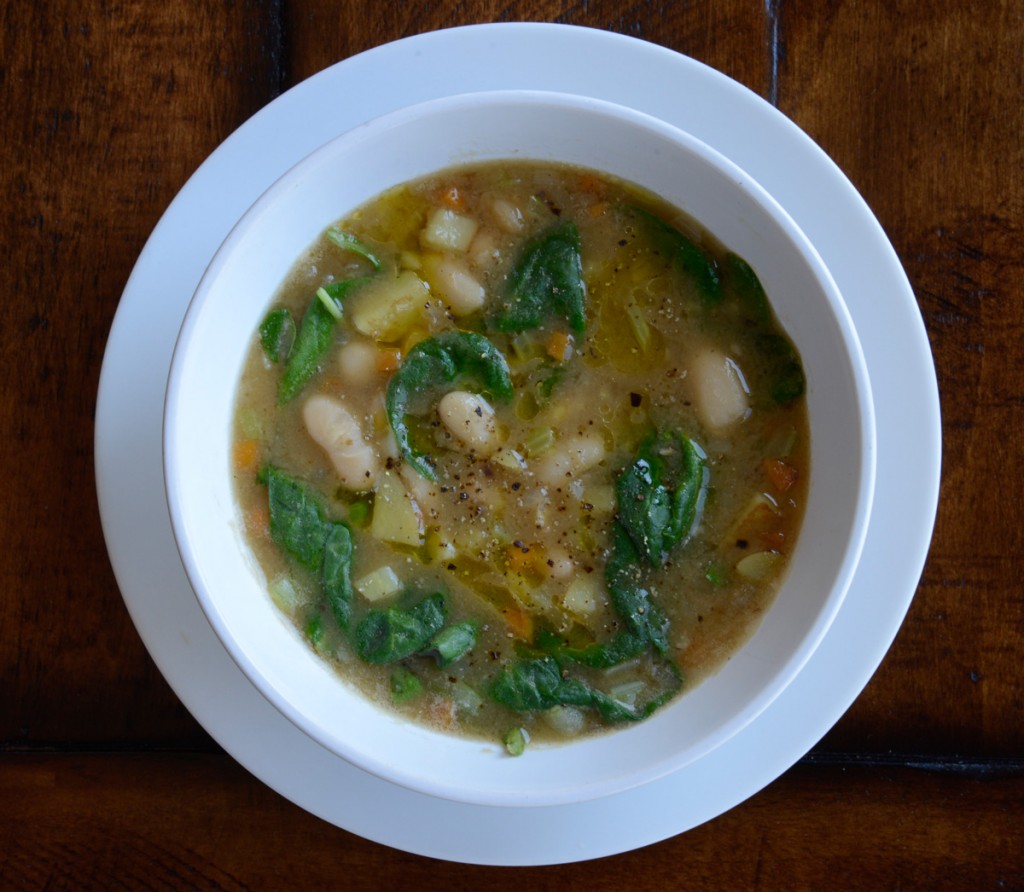